I had responded to this exact same question asked via Plinky prompts months ago here. Not so surprisingly things remain the same. These days a lot of it are same with the daily prompt. More new ideas needed people!

Okay so the title is just partially true, as technically I never had a room of my own so far, and the living room was always ‘my room’ (except when the kitchen and toilet were required that is)

When I think about over a decade ago, my home didn’t have over half the things there is today, and yet seemed messy. Here is a previous post specifically on my living room.

As you can see from there, except the bed with a different thing on it back then, nothing was is present now was there. Since it’s phoneography month going on, here is another picture.

The folding table which is now loaded with my sister’s laptop and junk was on the opposite side of the room and only used when we had guests over for dinner in the house. And one thing I recall, despite having a big bed in the bedroom and another one in the (which I currently crash in) hall (the more common word here for living room). The (almost) entire family used to sleep here on the floor (with the mattresses and all that stuff of course). Only my grandma used to sleep in the bedroom as she used to get up at times for various reasons. I didn’t quite understand why, despite having enough room leaving only person to crash on the floor, which no minded or actually cared about then.

Well as years rolled by, when I was 14 or so, she became bed-ridden and was present in the hall while I stilled crashed on the floor and the rest three viz pops, mother and sister slept in the bedroom as it was enough for three. She died in June 2011, and now I sleep in her bed since then. Guess now everyone have grown too old for sleeping on hard surfaces too. 😛 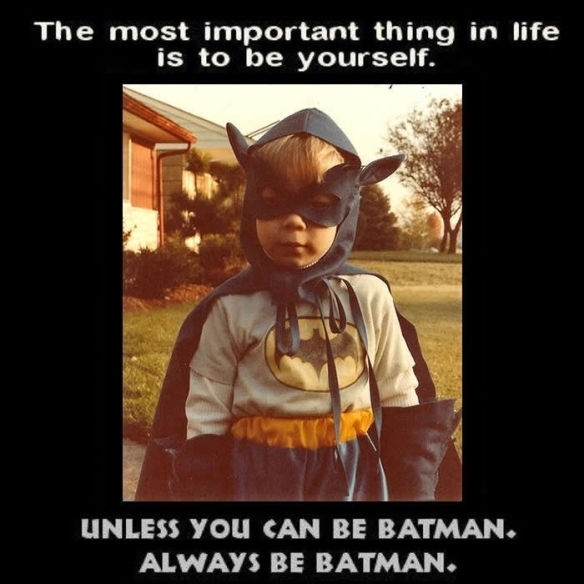 If you could be any fictional character in the world, who would you choose to be? Why?

For me, this is the answer. And well for those who know me, was pretty much obvious.

Every child needs a Super Hero growing up. For as long as I can remember my super hero has been Batman. I have always been a Batman fan, ever since I could read and make sense of things.

Wait, let me tell you the truth. For as long as I can remember I have always wanted to BE Batman. So it wasn’t just a fictional character, this was a real deal.

I could relate to Batman, if I really wanted it bad enough I could be Batman, and I think that’s why I was so obsessed and motivated by Batman is because Batman is real, he is one of the only few super heroes with no super powers or whatsoever. Unless you consider money, which is the biggest real world super power. Well not really.

Batman wasn’t born a super hero, he made himself one.

“A hero can be anyone. Even a man doing something as simple and reassuring as putting a coat around a little boy’s shoulders to let him know that the world hadn’t ended.”

Anyone can be Batman, you just have to want it bad enough, you can choose to be your version of Batman.

Speaking on this subject, let me introduce you to this project, a documentary about you, the fans. Experiences about bat-fans from many walks of life, and how Batman has had an impact on our lives. A must know for every bat-fan. Legends of the Knight. Spread the word and be a part of it!

Basically the title comes from three of my favourite songs from my most favourite band Linkin Park which describes my life in a way. The lyrics explain it so beautifully that I don’t need to explain anything.

If you could visit any city in the world, which city would you pick and why?

That’s an interesting question, I always wanted to travel around the world.

There are many places I would like to visit (not just limited to cities) first. Waiting for time and the opportunity to present itself. I would love to go to New York, for pretty much everything. NY is like the bigger better version of my home city Bombay (I guess). I want to visit Los Angeles and San Diego too, for being in most awaited events of the year which being E3 and SDCC. Besides always wanted to see Hollywood too. Others being the glorious city of Rome, London, Istanbul, Montreal, Vancouver just to name a few which I can think of at the moment.

Alright that title was simply referring to the 1994 classic movie Forest Gump.

What do I prefer more between a beach or a forest? Well that is an interesting question. I love forest areas and spent quite some quality time in them. It’s like an isolation away from the current world, to a world of peace. even if it’s not in literal sense. And speaking of beaches, in my great city, that is a joke. There is garbage in the name of beaches here. Heard in some other parts there are good ones, but I don’t recall the last time I’ve spent quality time at one. I would like to be at a good beach one day and sleep on a hammock looking at the ocean and the sun, and thinking about all that happened. I’ll wait for that day. Besides there is a (not so kid friendly) thing here on my bucket list too.

Differences and Similarities: which divides us more?

This is a very good question to ponder upon. It can be viewed on at many levels, from individuals to a country. We all have people in our lives and around us with both traits. We tend to bond with those who are similar to those, with similar interests, tastes and likings but at the same time we are also like having different people with all these different opinions and different views of the world. Doesn’t that make everyone of us special?

But coming to which of them which divides us more, that is the tricky aspect. It is in truth, more of a rhetorical question as an argument for each can be correspondingly countered with the other. Differences can lead to many new areas, but they can widen the area too much. Similarities can bring some together, but too much of it leads to fanaticism. Each one stretched beyond a limit in their direction leads to separation.

Similarity and Difference are integral parts of each other. You can’t pick one over the other. What makes us all similar is that we all are different.

Ni dieu ni maître!
There’s big bow world out there bitches
occupy forward
coffee without boundaries
me, at every pretty girl ever 🐶
Let there be light (and never ending 🍷)
MURDER ME WITH THOSE EYES
grids and games, some things don’t change (also i need more space) #pcmr #nintendoswitch #nintendo3ds
There’s a first time for everything I suppose (not talking about blowing here)

The Nameless One
Blog at WordPress.com.