This was taken awhile back. Not a very popular sign, but this really caught my eye and made me *sigh*.  This is at the 8th platform at the railway station where I stay- Borivali, Mumbai; which is the second largest place in the city and one of the important connecting points. And yeah, I’m king of the north here! (*GoT reference impossible to resist*) 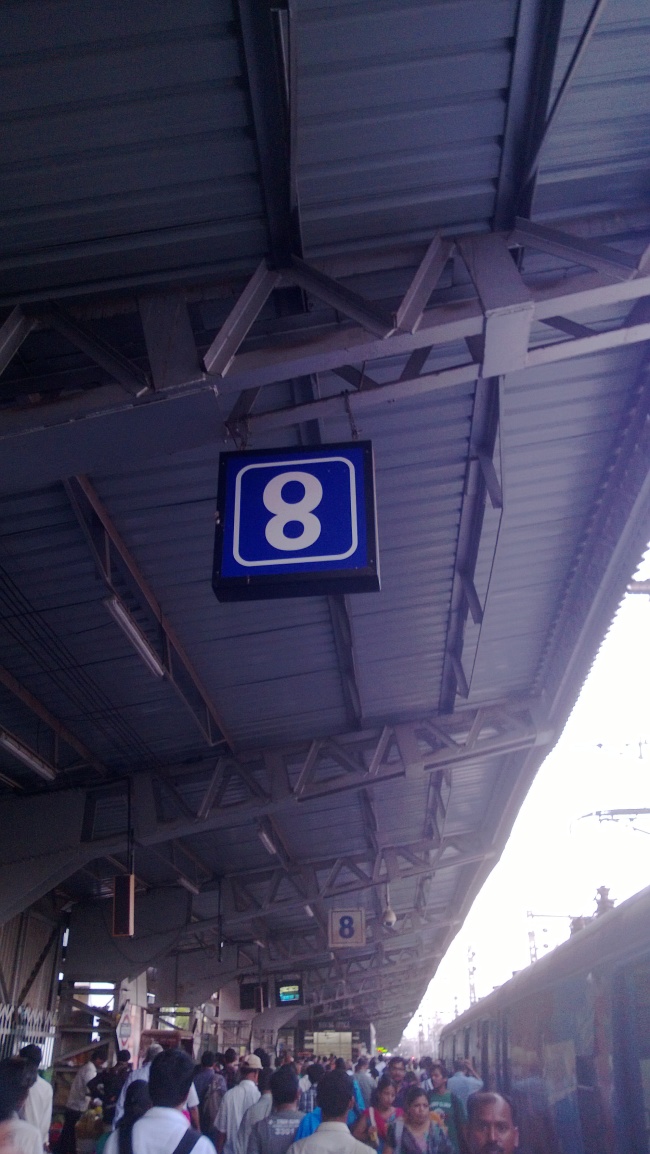 You had just one job…

Speaking of backgrounds, while the word brings many wonderful (and also awful) imagery to the mind, I was always curious about the ones at events like in premiers, launches or anywhere in general. Honestly most are really meh, in spite of all the stupidity, while there are those which have really work put in them. 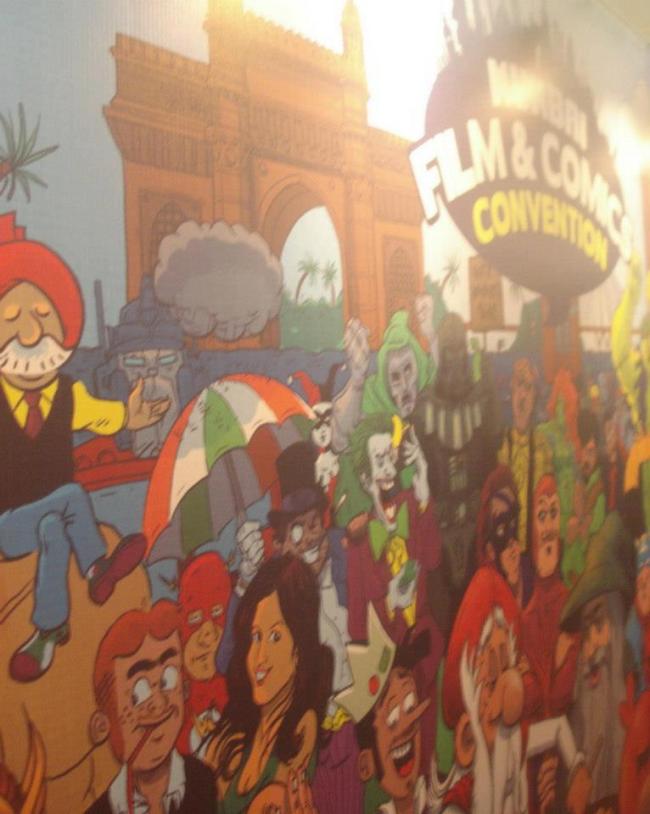 This was from the Mumbai Comic-Con 2012. Simply well done. And here is another one, from the launch of the book, ‘The Oath of the Vayuputras’ when I met one of (rather only) my favourite Indian author which was on my birthday. Well the artwork of the book is so magnificent that really nothing more work was required. 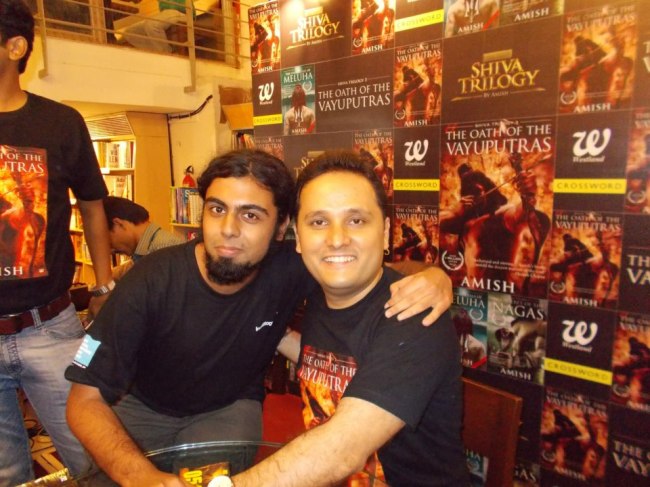 Sorry for the delay again. So in making up for my escape, it here are not one but two. First one is from a small trek over 2 years ago, at a place called Kolwan. I really love that country side place, and I curse myself for being in my current life scenario, I ought to be on the go more now. Here is the facebook album with more pics. Away from this worldly conflict. Bliss. 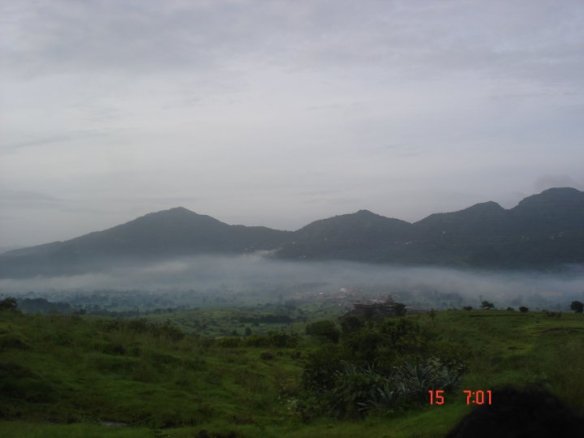 The second one is just my laptop and some good things to eat. Video games, movies and highlighted here, television, another way of escape for me from this world. 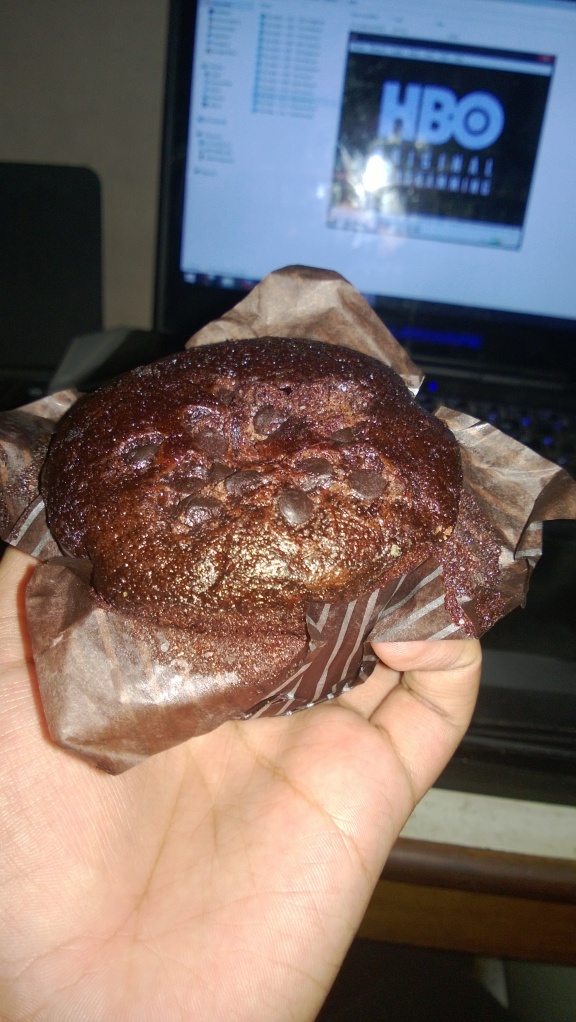 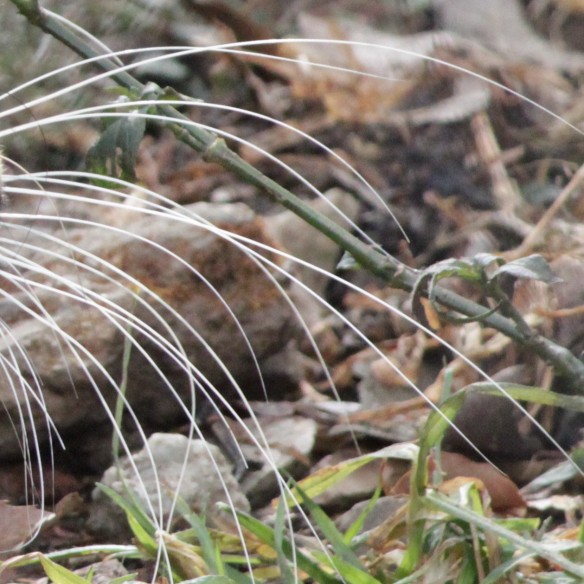 So for this week’s writing challenge, I played with one of my earlier uploaded images. What made me go for this is the details of the (original) photo. So what could this possible be? 😉

Cookies if you can get it right. I’ll give you a hint, this has got to do with a previous challenge too. And subtlety I gave another hint which a regular challenge abiding blogger might get.

My response to this week’s challenge forward, here not forward in some space ie somewhere but showing forward in time. 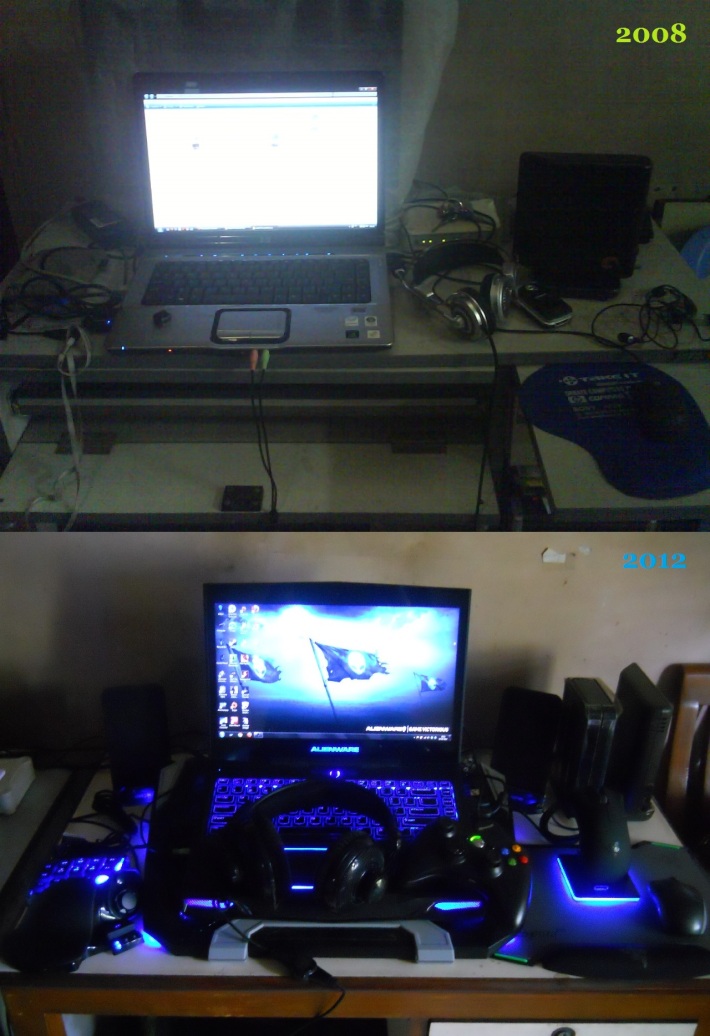 My personal space back then and now. Really came forward don’t you think? 😉

For this one, I couldn’t think of anything cool, sweet or whatever. Made me think that I have witnessed from humans to otherwise lot of beautiful moments, but alas I could never actually capture it say for in my mind. Well guess somethings aren’t meant to be captured on a lens. (or that is something which a amateur photographer would say, I guess)

So here is my entry which I thought would be best (for now) and well, at least relevant. 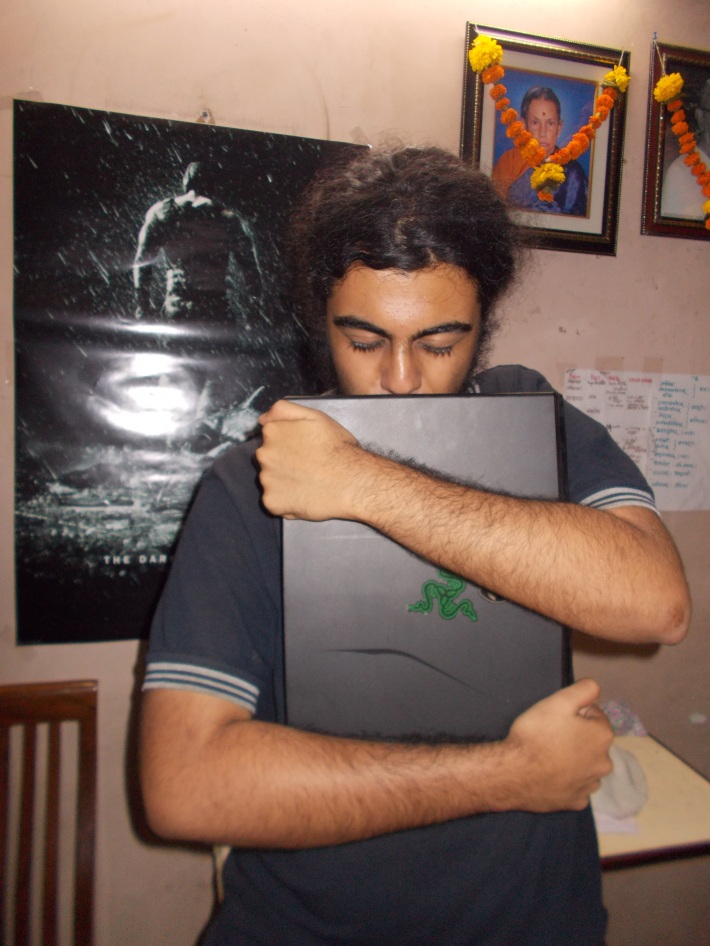 Sorry ladies, that is my true love, my laptop. (well, for now) 😛

So this one can be a bit tricky one. Thinking of love, to me and everyone else, a lot of things come into mind, here speaking in context of pictorially. Now I’m not going to speak about love or give my ‘opinion’ on it, hell in reality you can’t have an opinion or perspective on such things.

There is love, unconditional, there is affection, attachment, lust, just making yourself feel good. Most people easily confuse all of them, and all of them are related in one way or the other so it becomes tricky.

So here I’m just posting the first thing which came into my mind. My home has been a birth house for numerous pigeons and sparrows for nearly a decade, this is a pic taken a long time ago (don’t exactly remember when, might pre-date 2007) which I originally posted in my other blog (sorry for the ‘low quality post’, was pretty naive back then if you see the archives). 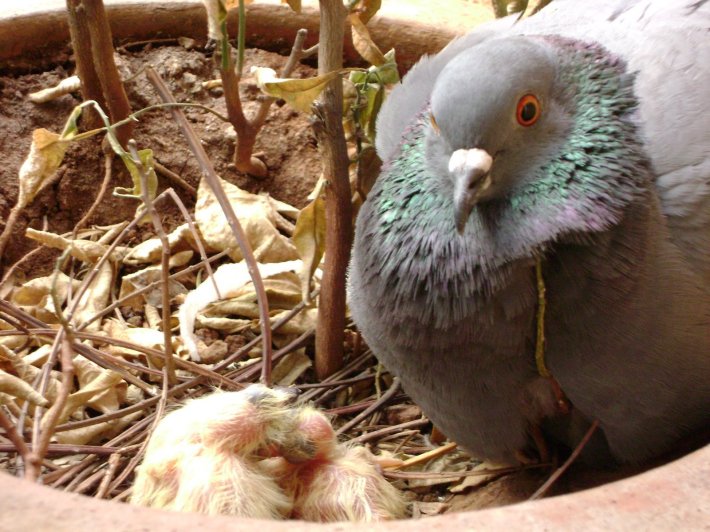 A mother’s love for children. Pure, unconditional love. Here is a bonus picture of the baby pigeons some time after birth. 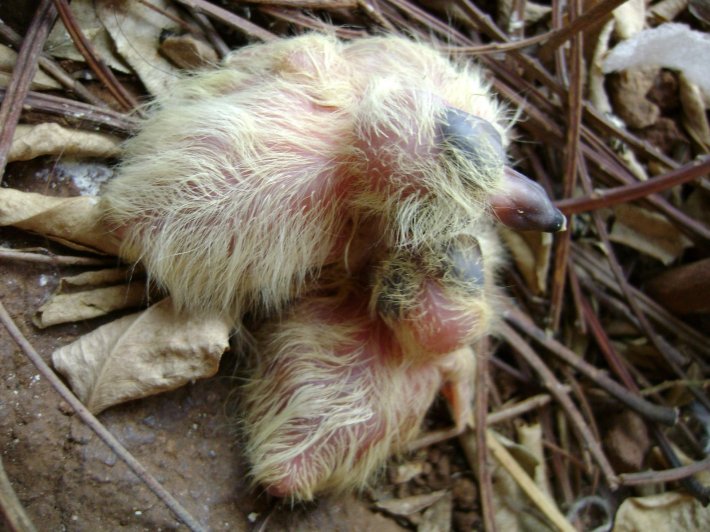 Well sadly we live in such a world where mothers sell their children, kids kill their parents and all such shit happen. Always try to be realistic, but that doesn’t mean have to be all pessimistic.

And speaking of mothers, today is my mother’s 51st birthday. Happy Birthday Mother (yeah I call/address her that). 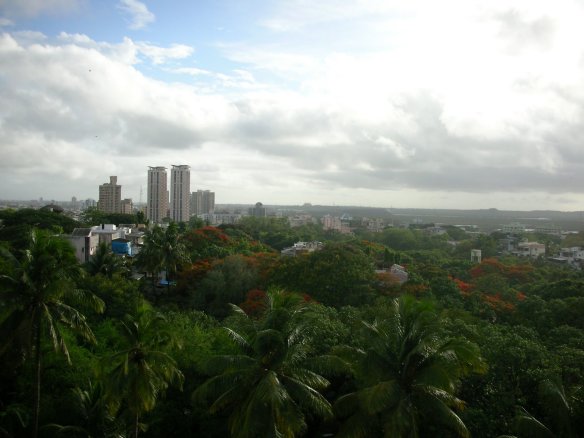 This is a photo taken back in late 2007 or early 2008 exactly which I can’t remember right now. It is a view from the top of my school from one of the buildings, and since my home is about 5 minutes away this is more or less a view from my home too.

What strikes me in this picture as it has the natural beauty in it, the slums and the fancy big buildings all around together in one place. I live in quite the mixed neighborhood. It shows me that the world is out there to be faced. Well the sky looks good too. While there many photos which I could have put up here which reflected beyond to me, for this reason this image struck me the most here. 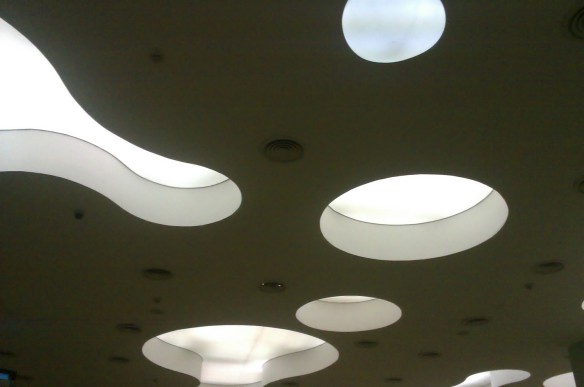 My idea of illumination: Randomness. This was taken at a mall where I was hanging out in the last week of 2012, sitting idly and just looking at something to click. Completely random. I’m fascinated by lights and such decoration, but this tells the truth as per my perception.

Well apart from that, my precious laptop too 😀 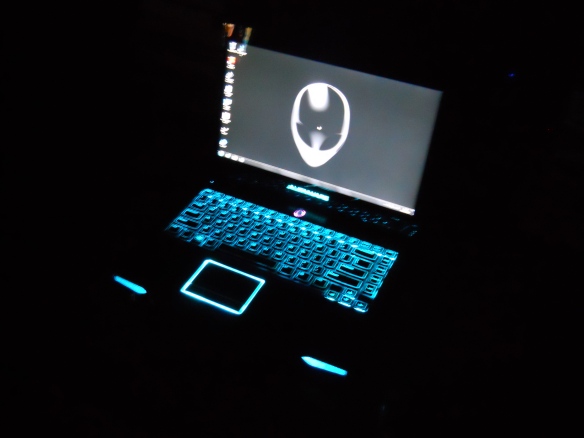 Today’s daily prompt is one of the most interesting so far, which actually made my lazy ass get up and do something. It is late evening now and I don’t have a great smartphone or camera, and me being a passionate photographer planning to get one soon, this is the best I could do at the moment. 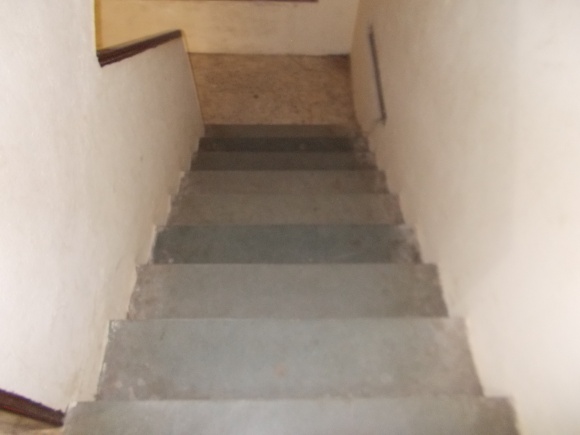 Just opened my door and this is the first thing I saw. Stairs leading down from my home. This reminded me of one of the most famous rock songs of all time, Stairway to Heaven by Led Zeppelin. I think I should name this Stairway from Heaven, or rather Hell, I don’t really know. 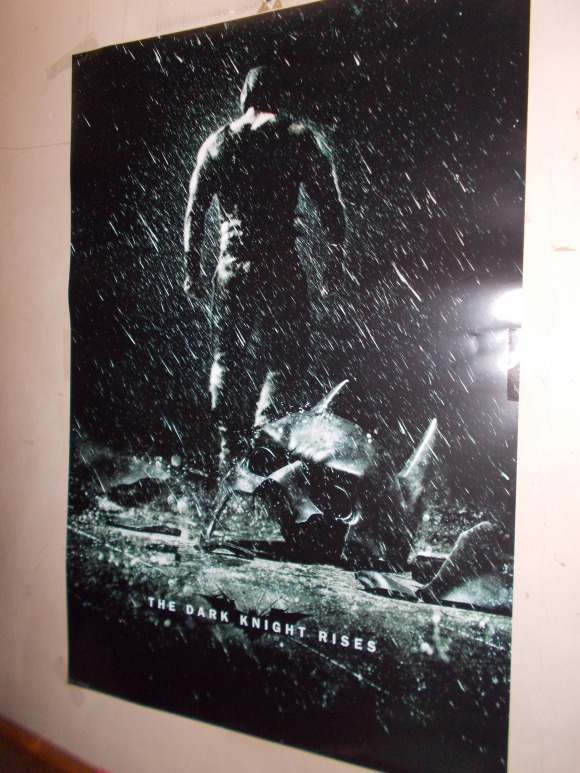 This is the first thing which is visible after entering my house. Got this as a gift in December ’12 by my secret santa via redditgifts. On my living room wall ever since.

Now before I could think of a connection between the two, and write some arbitrary stuff, to my astonishment I didn’t even have to think of anything! The connection is so clear (or I would like to think of it that way). The first image (outside my house) the stairs down. In the title why I preferred descend rather than fall from the epic The Dark Knight, though that did strike my mind first, I just felt we mostly likely fall at one or even more than one point of time in our lives we will fall but to my interpretation here that depicts in life we must get out of our comfort zone (ie our home in this context or any other in general terms) and descend to move ahead. We don’t fall willingly and falling down the stairs is pretty bad too (saying this with a lot of experience)

The second image, the poster of one of the best films made in our history, The Dark Knight Rises, and also my most favourite, is the second ‘stage’ or however you might put it. No matter who or where we are, to succeed we must make effort and Rise. The way back home, the stairs up is also a pretty dam relevant here. And Rise not only in the world, but also within (inside home).

So much connection metaphoric to life in just two simple images I took within 5 minutes following this challenge. Now I’m astonished myself.