“Why, sometimes I’ve believed as many as six impossible things before breakfast.”

– the White Queen, Alice in Wonderland.

What are the six impossible things you believe in? (If you can only manage one or two, that’s also okay.) 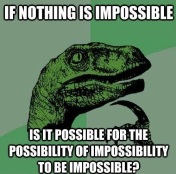 I saw the daily prompt just when it came up when there was zero responses. After several hours now and reading all the responses, with some I also have agreement with, overall the conclusion is I can’t even think of one. What came into my mind initially and which made most sense is what defines possibility and impossibility. By that, I don’t mean sitting or jumping inside a volcano, mind you. The question is to what extent is an issue dealt rationally and the possibility of something happening or not. It becomes a matter of time in most cases, and I don’t believe in predicting the future.

Heck for the sake of not scoring a zero, this is the best one I can come up with:

– People will stop using the quote “Nothing is impossible. Impossible itself says ‘I’m Possible’.” Dam I get annoyed every-fucking-time when people bring that up simply in the context of this subject.

7 thoughts on “Probability of (Im)Possibility”